The walk of a lifetime

by Kenneth Perkins
in People
0 0
0 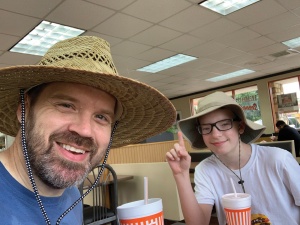 Dad wanted to go on a father-son bonding adventure.

Because life really can be a marathon

Son wasn’t so sure. Even less so when he learned the details: Make the 50-mile trip from Arlington to grandma’s house in Springtown.

“He wouldn’t have it,” says the dad, Greg Haugen.

So Haugen did what any respectable dad would do.

He bribed the kid.

Told Jack, the son, age 12, that during this rather ambitious foot-a-palooza they could stop at every Whataburger along the way.

Jack could eat whatever he wanted and drown it all down with his favorite, can’t-live-without-it Strawberry Fanta.

So in late June, Haugen and Jack strapped on backpacks, slapped on a generous helping of sunscreen, and went at it, despite the mild reservations of Jack’s mom, who initially thought her hubby was, well, losing it.

Haugen had mapped out as best he could a path that would keep them off highways and out of unsavory places after dark. Leaving Arlington at the crack of dawn, they made their way just north of Fort Worth, trekking through Hurst and ending in Saginaw. Of course, seeing what’s on a map and encountering what is really in your walking path can be tricky, such as having to navigate a creek that seemed to have been hiding on the map.

“So I looked at Jack and said, take off your shoes and socks,” Haugen says. “He just looked at me and said, `what?’”

After hitting a Whataburger in Saginaw – by then it was late – they merely walked across the street to a hotel.

Jack was out within minutes.

As for Haugen, well, he secretly nursed the blisters on his feet.

“I got a little worried,” he says. “Didn’t know if we’d even get to the second day.”

They did by trying to find other things to occupy their time – songs, games, counting American flags.

By now the traveling twosome, who were chronicling the adventure on social media, were going viral. At the Whataburger stop in Azle, Haugen and Jack were greeted by hoards of family and friends. Whataburger had gotten wind of the whole thing and decorated a table, complete with streamers and balloons, for the two. “We walked in to applause and cheers,” Haugen says.

Around 9:30 p.m. on June 28, three days after they left Arlington, dad and son strolled up to the front door of grandma’s house, weary, relieved and revived.

Mom met them there, too, saying how proud she was of her dynamic duo.

Maybe the whole thing wasn’t so crazy after all.

Whataburger gave them T-shirts and a new pair of Whataburger colored shoes. Even Jack thought, in the end, it was kinda cool.

For Haugen, well, it all had a far deeper meaning than a Facebook-worthy escapade.

At a time when teens and their phones are intimately intertwined, they have become somewhat detached from family, finding solace in Snapchats and Instagrams. Overly busy parents don’t help. The downside of our glorious technology is a growing divide and loss of connection between parent and child. These days we often retreat to our own corners of the house, texting rather than actually talking, the ramifications of which are dwindling relationships.

As a choir director at Lamar High School, Haugen sees this all the time.

“The biggest takeaway is we had a chance to connect in a way that the busyness of life would not have allowed us to do,” Haugen says. “We talked about school, about church, about life in general. I would not trade that time. We will have some really great memories for a long time.”

Haugen isn’t sure what they might do next summer.

He knows what it won’t be, though.

“Jack in no way wants to do another walk any time soon,” says Haugen. “But he’s up for anything else.”