by Kenneth Perkins
in Community
0 0
0

When bulls-eyes are perpetually glued to your back, as is the case each year with the Bowie High School Girls basketball team, stepping into a gym with little notice would mean pulling off some Houdini-like feat. Yet that’s exactly how Head Coach Kelly Carruthers wants it to be. She’s calling the upcoming season a rebuilding year since her team, seven consecutive District 4-6A basketball championship winners and equal opportunity butt kickers, are young and inexperienced and have no towering post player to speak of. 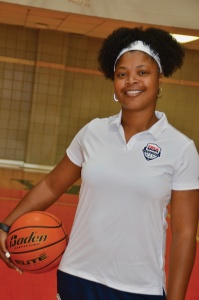 So three days before her first practice, I ask Carruthers about her plan of attack, for which she smiles and quips, “I really don’t have a plan.”

“I’m being very open minded right now,” she says. “I have an outline of what I want to see done. But I know I’ll have to adjust based on my personnel.”

Her voice, calm and cool, makes me wonder whether Carruthers is simply keenly confident in what she and her assistants can accomplish, or she’d make an awfully good spy.

Thing is, Carruthers is rarely rattled.

As a junior baller at Apple Valley High School, in Minnesota, Carruthers goes down with a concussion during the first round game of the state tournament and has to watch her No. 1 state ranked team blow a perfect season.

Two years later a broken ankle wipes out her freshman season at the University of Colorado at Colorado Springs.

But there’s something about how Carruthers reacts to adversity – she tends to thrive after it, like a Pac Man growing in strength – which is what undoubtedly makes her teams so dangerous as the seasons deepen.

Going down with that ankle injury puts her on the bench next to the coaches where her perspective is transformed.

“I could see more clearly what we needed to do to win,” Carruthers says.

Call it her Ah-Ha Moment.

Carruthers arrived in Texas not long after college graduation with a new job and new husband (hubby is from Oklahoma City but the wife said, uh, we gotta compromise). She was hired on the spot to coach at Workman Junior High before making her way to Bowie, where she climbed the ranks from freshman coach to junior varsity to varsity, where she took over for legendary Coach Wanda Talton.

Asked how, exactly, she could fill such ginormous shoes, Carruthers would simply respond, “I’m not. I’m buying my own pair.” She couldn’t imagine reinventing such a well-built wheel, so she didn’t. Her goal: “Build on what was already here.”

She has earned District 4-6A Coach of the Year honors seven times. And it’s not just piling up Ws. A whopping 98 percent of her players have earned college scholarships.

When USA Basketball sought after an assistant for its National U16 team, they wanted a solid coach, sure, but Carruthers also brought the intangibles few others possess. Being an assistant to head coach Mark Campbell (Union University) and alongside assistant coach Ruth Sinn (the St. Thomas University coach who, by the way, was Carruthers’ high school coach) freed her up to fill in the holes.

“I was the one who went behind the scenes and checked on the girls to make sure they were okay,” she says. “I kind of sat back in the cut, and I was okay with that.”

Competing in Aysen, Chile, against eight countries from North, South and Central America, the 12-member Team USA was crazy good. Their toughest match was the Gold Medal game against Canada – a 50-point win.

“It was an amazing experience; probably the best highlight I’ve had in my 17 yeas of coaching,” says Carruthers, who served last summer as a court coach during the trials. “I was standing in the huddle, and I’m like, gosh, you guys can’t even see me in this huddle, and I’m 5-11. Our guard is 6-2 standing behind me, and I’ve got a 6-5 wing in front of me, and our post player is 6-8. This is unreal. Then I have to go back to my kids who are 5-5.”

Still, as the sharks circle, Carruthers is, again, cool and calm.

“We will have to focus on what we are good at as far as utilizing our speed, taking advantage of our quickness, pressing, working on our defense and being really good at a few things,” she says.

Rebuilding or not, the Carruthers philosophy remains.

Get better everyday. “Five teams on our preseason schedule are state-ranked,” Carruthers says. “This year we won’t be ranked. I’m okay with that. I don’t want a target on me.”

Then she smiles. “Not yet anyway.”