What’s a ‘Z-Sled’?: Gary Daley’s Camaro has been the car of his dreams for four decades-plus

As these photos suggest, Gary Daley’s 1977 Chevy Camaro Z-28 has all the trappings of a classic automobile that was created to stand – and that has stood – the test of time. (Photos: Richard Greene)

Most young guys share a common enthusiasm for automobiles. It’s hard to predict when that urge kicks in, but it really accelerates when they can buy the car of their dreams.

There are few whose stories about how they turned their desire into reality who can match 19-year-old Gary Daley’s procurement of his 1977 Chevy Camaro Z-28 some 43 years ago.

Chevrolet reintroduced the Z-28 midway through the 1977 model year – a decision that resulted in less than seven percent of that year’s total Camaro production. They were hard to find and in short supply everywhere. 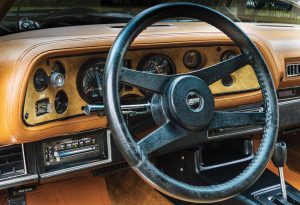 “I was on the wait list,” Gary explains with perfect recall, “and had deposits at five or six Chevy dealers in Kansas City. I frequently called other dealers to see if any of them had gotten any Z-28’s in stock.

“One Saturday morning I called New Union Chevrolet and they told me they had one that their buyer had backed out of, so I rushed over with my brother to see the car.

“My first choice was brown, and this one was brown! The window sticker price was $6,500 and I told the salesman I would take it for $6,000. ‘No, you won’t’ was his immediate answer as there would be no discounts on this car. So, I paid full sticker price.”

A noteworthy moment in Chevrolet history adds to the understanding of the car’s attraction – it was the first year when the Camaro outsold the Ford Mustang.

Since that time, Gary’s love for his car has only grown. His attachment to the car can also be better understood when he shares his early experiences with it.  >>>

“My high school buddy and I (we would later become the best man in each other’s wedding) referred to our cars as “sleds.” Whenever we would plan to go somewhere or just cruising, we would ask each other, ‘Do you want to take my sled or your sled?’ So, as soon as I got my new Camaro, it became known as the Z-Sled.” 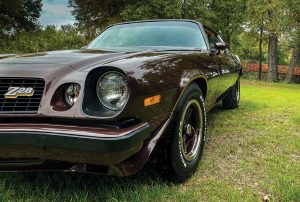 I asked him if he dated his wife, Vivianne, in his Z-Sled. I could have guessed the answer. “This is the car that my wife and I went on our first date back in 1978, and we’ve now been married for 39 years.”

Fast forward in his story about when his son Kyle was soon to turn 16, get his driver’s license and wanting his own car. “We offered him the Z-Sled and his immediate answer – ‘No way, Dad!’ and I thought he declined because it was my car, my toy.

“But I asked him why anyway. His response, ‘Dad, It’s brown! Nobody wants a brown car!’”

Last year Gary dealt with the reality that his prized possession needed some repairs and restoration. “I fully intended to do the repairs myself, but never seemed to find the time. One day my bride said, ‘Let’s take the Z-Sled to someone and get her tuned up,’ and she didn’t have to twist my arm very hard. So I’ve had many things fixed up thanks to master technician Robert Massengale, who has put it back in as original condition as possible.”

Readers may recall that we’ve covered in previous editions of this column some of Massengale’s talents with cars he’s restored for other owners. 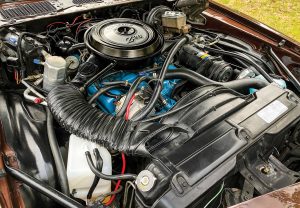 “These days,” Gary continues, “I frequently tinker with little things on the car and have truly enjoyed having her back up and running well and looking new.”

Gary’s long devotion to this pristine vehicle is evidenced by the display board he takes along to car shows that includes the window sticker, build sheet, sales brochure, owner’s manual and sales receipt. All originals.

People often ask him how much is his car worth. He’s instantly ready with a classic response: “Way more to me than anyone else!”

No, the Z-Sled is not for sale and, after understanding the passion of its one-owner history, anyone would know exactly why.