Where you can still be a kid 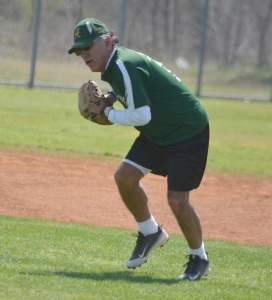 The idea of lounging on a couch sipping green tea after retirement is actually an enticing option following a demanding career doing “You Fill In The Blank.”

Then the next day arrives.

Can’t say Dennis Bashore wrestled with this quandary, but after traveling nearly non-stop for Hewitt Packard, he was all set to downshift to neutral.

Since then he’s been having a heck of a (good) time trying to find his body’s turbo-power switch. Gotta be there somewhere. Extra oomph certainly helps when trying to stretch a base hit into a double or beating out that grounder to short.

Bashore is still quite nimble for a 71-year-old, though what he sees his body doing and what it actually does are often at odds.

Still, Bashore is quite content on a baseball diamond with his peeps, other ballers who also compete in the Metroplex Senior Citizens Softball Association, which now has 31 teams in 16 cities and three divisions – players 55, 55 and up, and 65 and up, including 91-year-old Johnny Williams and an 80-something player who competed with an oxygen tank strapped to his back.

“Sometimes you’ll see someone in the gym who looks relatively healthy and just ask, ‘you play sports?”

They are often enticed by the rules, which center on bodily protection. No sliding, no contact. Extra bases are off to the sides of other bases, giving runners a clear path. Can’t run? A teammate can run for you.

Delmar doesn’t play much any more, not since that 2010 operation that put a pair of titanium rods in his back. “So I just manage and coach,” Delmar says. “Although the guys know what to do. I tell them to do something, and they say; ‘nah, I’ll do it my way.’ We have a good time, though.”

They do. Good-natured one-liners zip around this lively bunch; usually the barbs deal with age (“Ten years ago you would have caught that!” one player heckles another), and often the jokes are a form of self-deprecation. Watching the Angels battle the Grand Prairie Gophers in a pre-season game was a little like sitting in on a Rodney Dangerfield concert.

No one (wink, wink) got respect.

There is something gloriously humbling when you’re all in the same boat. As one Angel player put it, “We’re experts in surgeries – hips, backs, knees, since we’ve all had one or two. Or three.”

Of course, boys will still be boys, so the more “serious” players find such wordy repartee distracting. Delmar says to each his own, but he thinks it is far more fun to play for fun.

That’s the story with Edith Brown, 55 and one of the few women on the roster. Quick with a strong arm, she’s been playing shortstop on traveling teams. Colleges didn’t have much in the way of women’s softball in her day.

“This was my dad’s favorite sport, so he drafted me as a little girl and taught me all I know,” says Brown, who runs a non-profit shelter for abused families. “Being out here with these guys is absolutely wonderful.”

Ken Nelson, 73, hadn’t played the sport in years but returned after retiring from his metal stamping business.

“Man, what fun, and not just because I kinda like this bunch of cranky, grumpy guys on walkers,” he says, laughing.

Bashore likes them, too.

“What you don’t know about retirement is that the moment you leave work the 20 friends you had dissolves,” he says. “Being secretary of the league I’ve made 40 to 50 friends.”

That’s not even the coolest thing.

“I’m 71 years old and still playing a kids game,” he says before taking the field. “Don’t get any better than that.”