Youth will be served 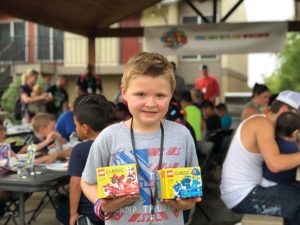 On Saturday mornings, while some children are headed to the playground or on their way to a baseball game, 7-year-old Dennis Tuttle IV can usually be found surrounded by Legos.

As a five-year-old, Tuttle knew he wanted to grow up and become a missionary. So he told his parents, who soon helped him realize that he didn’t have to wait until he became an adult to accomplish his goal.

Dennis Tuttle III, a Keller Williams realtor, says that after a bit of brainstorming, his son said, “I know, maybe I can become a Lego missionary.”

Now, with the help of his family and some friends and volunteers, as well as Mission Arlington and other generous supporters, Tuttle visits with other kids across Arlington using Lego sets to build bridges, friendships and faith.

On a recent Saturday morning, while about 50 parents and children from an East Arlington apartment complex gather beneath white canopies for a morning of fun and fellowship, Tuttle takes a break to talk about his ministry, Building Blocks 4 Kids, and how it works. The Grace Preparatory Academy second-grader tells Arlington Today it is “really cool” to see his dream become a reality.

Tuttle explains how every child is given a clear, plastic bag that contains Legos, as well as instructions in both English and Spanish that they can take home. He also says there are lots of different things that the children can build with the Legos, including tractors, castles, alligators, lions, airplanes, houses and whales.

“I really like the crab one that you can make, and the race car,” he says.

According to Mission Arlington’s website, at one North Arlington apartment complex, Tuttle and his friends pass out Legos, sing worship songs and share how God should be the architect of people’s lives. Mission Arlington, which was founded in 1986, serves hundreds of locations across the Metroplex, but Dennis Tuttle III – the dad – says the event is not limited to apartment complexes. He also says that the instructions provided with the toys are symbolic of how biblical instructions, when followed, can be used to build Christian character.

“This is, like, so fun,” says Kimberly Glaze, a volunteer who helps organize Building Blocks 4 Kids events. Glaze explains that a Mission Arlington representative had already been working with the parents and children regularly at the apartment complex and knew them through community relationships that have already been built.

With his mom, Brittany, holding his little sister nearby, the young Dennis Tuttle talks about how some people donate money and snacks to the ministry, which then buys Lego sets and more snacks to fill take-home bags that are given to the children.

“We realized that some of the children didn’t even have sufficient snacks,” says Dennis Tuttle lll.

The ministry’s Facebook page, which provides updates, shows store shelves periodically emptied of Legos. The senior Tuttle says some people also donate larger sets of Legos because a drawing is held at the end of the program where the children have a chance to win large Lego sets to take home with them. Two boys and two girls win the large sets as prizes. “So we walk around and make sure everyone has their name in the drawing,” Tuttle says.

During one recent gathering, Mission Arlington founder Tillie Burgin sits among the children as 7-year-old Justin Ogaraku constructs a crocodile with his mother looking on. Others parents stand holding small children as songs are sung and prayers are offered.

“Thank you, love y’all,” Burgin pauses to say before leaving.

Clutching sacks of snacks and Legos, several smiling children also form a line and begin to thank the various volunteers who have helped with the event.

Dennis Tuttle III says his son’s ministry has also teamed with a missionary in Africa and sent Lego sets overseas, along with a Bible study that was translated to Swahili.

“We’ve just been blown away by the response,” he says.

The younger Tuttle says he likes being a young missionary. And he also likes Legos a lot.

“It’s just being the hands and feet of Jesus,” he says, “and helping kids to know God better.”

For more information about Building Blocks 4 Kids, which is currently in the process of becoming a nonprofit, email info@buildingblocks4kids.org.