North Arlington has a brand new bakery, but its owner is no stranger to the American Dream City – or to one of its best-known residents.
Katie Kennedy, a former head pastry chef for the Dallas Cowboys, moved The Cakery from Southlake to 2430 N. Davis Drive in September. The Arlington resident is lucky, she says, to have a loyal customer base from Southlake that is willing to come to her new, centralized location.
“And now, the exciting thing is Arlington is starting to discover us,” she says, adding that she hopes her most recent customers will be more than just curious.
Kennedy, who once oversaw the creation of 100,000 desserts for Super Bowl XVL, says the bakehouse will soon be cooking and decorating Christmas cookies around the clock.
And that’s not all.
In addition to The Cakery, which whips up custom cakes with buttercream frosting for individuals and corporations year-round, Kennedy also owns its sister catering company, Marcona Kitchen, which will soon prepare and deliver holiday meals. Preorders for the heat-and-serve dinners, which can also be picked up, can be made up to a few days before Christmas.
Something new at the bakery this year is a bourbon pecan, cheesecake pie. And while Kennedy’s s’mores pie is nothing new, she says the recipe is wildly popular. The highly requested pie has chocolate and coconut with a graham cracker crust and a merengue topping. “[The recipe] stems from years ago; I was at a bakery, and I was making a pie filling, and I started to burn it a little bit,” she says. “And I was, like, ‘that’s kind of toasty; that just turned into a s’mores pie.’”
This holiday season, Kennedy says cheesecake pops and eggnog cake pops, as well as candy cane cake pops and cupcakes, will be part of the fare.
“Holiday cookies seem to be the most popular,” she says. “And those are the most time-consuming.” 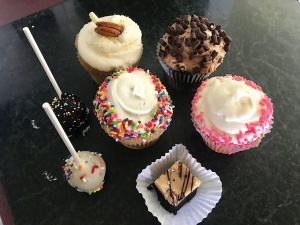 Depending on the bakery’s orders, Kennedy’s team of pastry chefs will sometimes show up for work at 5 a.m. To meet the holiday demand and help with corporate parties, Kennedy says The Cakery will nearly double its staff in early December.
Kennedy says she got her start helping her mother and grandmother in the kitchen. She later attended Le Cordon Bleu Culinary School in Austin and then worked for the Dallas Cowboys for five years before leaving to start her own business.
At this point, word of mouth seems to be working well, she says. And because of her experience with the Cowboys, she still does some things for AT&T Stadium’s Legend’s Hospitality, as well as preparing desserts for the principals at the heart of the Cowboys’ enterprise, the Jerry Jones family.
“I still get the opportunity to help Mrs. Jones with some of her specialty cakes,” Kennedy says. “I don’t do thousands and thousands of desserts.”
Also, carrying on a tradition she learned while working at the stadium, Kennedy donates any excess food items to local charity. “Stuff we can’t use for parties, we deliver to Mission Arlington,” she says. “They love it when we show up with produce.”