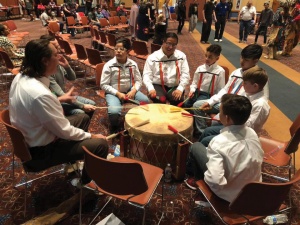 Native American Heritage Month was coming to a close as tribal elders and smiling youth gathered formally at the University of Texas at Arlington a little over a month ago to drum, sing and dance with friends.

While the ceremony was an official event to cap an entire month devoted to honoring heritage, Kasey Reynolds, president of UTA’s Native American Student Association [NASA], says promoting cultural awareness is something the group does continually.

“[Native Americans] strive every day and every year to become a remembered and known part of today’s society,” Reynolds says. “Many people think Native Americans are extinct today, and that just simply is not the case.”

The celebration was the third event NASA has held this year, says UTA Professor Kenneth Roemer.

The events help secure scholarship funding for Native American students as well as those who show a concern for the Native American community, Reynolds says, adding that along with efforts by local groups, the activities help the community thrive.

Reynolds, a Cherokee, is generally eager to share a brief chronological history of what happened after Christopher Columbus “got found by Natives” in 1492 and as America developed. The
traditional idea of Pilgrims and Natives bonding during Thanksgiving is faulty, he notes, and the real history reads more like a Grimm fairy tale instead, with Indians who rejected a peace treaty being decapitated and their heads used like soccer balls. In addition, Reynolds says Columbus’ deeds were so disturbing that a number of soldiers converted to priests while seeking atonement for sins committed against the Native population.

With members of the Comanche, Choctaw, Chickasaw and other nations in attendance at the recent celebration, Reynolds wanted to pay homage to the Wichita people specifically. “The land we stand on today was Wichita,” he says.

Throughout the evening, Native culture was also shared in a positive light with seating arranged in a large circle and samples of fry bread available nearby.

Dennis Begay, who asked that the words of his sacred songs not be recorded, led the opening prayer and also danced an Old-Style Fancy War Dance. During the festivities, there were discussions about Native American veterans, the importance of educating and empowering Native women and Indian-made arts and crafts.

Pointing out a booth filled with his mother’s hand-crocheted items, Neal shares how Native American heritage is expressed through colors and symbols.

Reynolds also notes how American Indians have answered the call to fight for freedom even in the midst of adversity. “We protect what is ours, and we stand for what is right,” he says. And “we have worked with our youth to make sure they learn our ways.”

Jaden Landeros, an Ojibwe seventh grader from Richardson West Junior High who was drumming with the Soar Beyond Youth Mentor organization, expressed thankfulness to UTA for being able to learn about his culture.

“Being Native American and having our ways isn’t a one-month-out-of-the year occasion,” he says before referencing the words of Black Elk and asking the audience to cease from distractions.

“We are about to take our thoughts to the Creator,” he continues. “We honor our ancestors and relatives that have gone on before us.”

NASA’s 24th annual Powwow, which is free and open to the public, will be held Saturday, March 2, in UTA’s  Bluebonnet Ballroom.