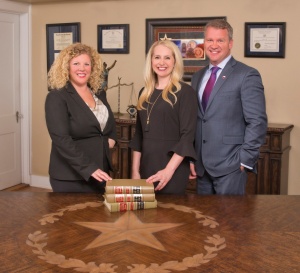 Harris Cook, LLP, is an established North Texas law firm with a long history of service to the community. The legacy began when the late Senator Chris Harris founded the firm in 1971 – and has carried on, almost systematically, in the years since via a veritable passing of the civil service baton from one principal of the firm to the next.

Harris’ yearning to serve ultimately manifested in his election to the Texas House of Representative from 1985 to 1991 and then to the Texas State Senate from 1991 to 2013. All the while, he anchored the law firm and represented both clients and constituents with gusto.

In 1993, David L. Cook began working with Harris at the firm and became a partner in 2004. Like his mentor, Cook took on the dual role of attorney/public servant when he became the mayor of Mansfield in 2008, and a trend was born.

A third member of the Harris Cook legal team, Brody Shanklin, ultimately became a judge in the 211th District Court. And recently, a fourth Harris Cook attorney, Kimberly Fitzpatrick, was elected mayor of her hometown of Dalworthington Gardens and earlier this summer was also elected to be a judge for the 342nd District Court.

That Fitzpatrick would carry on the practice’s legacy isn’t a surprise – public service is practically in the genes of the venerable law firm. Like her predecessors, her love for justice and for the community moved her to answer a calling that has defined Harris Cook, LLP.

“I believe that we need judges that are fair and impartial and that will always follow the rule of law,” Fitzpatrick says. When the opportunity presented itself, I was excited to take the next step in my career.”

The judge race was a new endeavor for Fitzpatrick, but since the beginning and through the runoff election in May, she worked tirelessly in spreading her leadership and community roots.

“You do not realize how big Tarrant County is until you run a county-wide election,” she says. “I tried to meet as many people as possible across the county to get my message out. I was blessed to have amazing volunteers who spent countless hours helping me block-walk and phone bank.”

All that work paid off in the end though, Fitzpatrick won the coveted judgeship position and was appointed judge by Gov. Greg Abbott on June 26.

To fill Fitzpatrick’s role at Harris Cook, the baton was gleefully passed to Rachel Wright.

An Arlington native and an University of Texas at Arlington alumna, Wright is an experienced litigator and trial attorney who has represented business and personal injury clients across the State of Texas.

“Rachel started with Harris Cook in June,” Fitzpatrick says. “She is an amazing trial attorney and very successful in court. I am so honored to have her take over my position because I know my clients will be in excellent hands.”

“Also,” Fitzpatrick says, “Rachel and her family have deep roots in Arlington, with a long history of community and public service.” Rachel’s father, Ron Wright, was an Arlington city council member and former mayor pro tem, and was most recently the Tarrant County Tax Assessor-Collector. Ron is currently running for U.S. Congress for the Sixth Congressional District, which includes Arlington and Mansfield, and Rachel has been an active volunteer in his campaign.

Harris Cook welcomed Wright into its family in June, and she will be in good company.

“David [Cook] is always encouraging others the value of having a servant’s heart,” Fitzpatrick says. “From the start, David has always pushed me to work harder and encouraged me to be an active participant and leader of our community. David has been such an amazing mentor and his career has definitely inspired me. Chris [Harris] has really started something special.”

That special quality makes the baton handoff to Wright effortless, and Harris Cook, LLP, still one of the most trusted law firms in Tarrant County. Chris Harris would be proud.