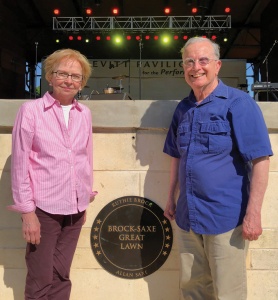 While I don’t really know what qualifies as a customary period for courting before marriage, I’m confident that one of Arlington’s most beloved couples may have set the all-time record. After being together for more than 40 years, Allan Saxe and Ruthie Brock are now husband and wife.

The marriage was made official at the county sub-courthouse in April that Allan described in his usual idiosyncratic style: “We had quite a wedding crowd at the sub-courthouse across the hall from auto license renewals, where we signed a one page document and then had a wedding lunch for the two of us at Grease Monkey and then Gilligan’s Bar and Grill.”

Ruthie’s version varies some, explaining the clerk wanted a specific date for the instrument, “So we fussed a little bit at the counter, Allan said it didn’t matter, so I picked Valentines’ Day, 1987.

“We had been back and forth between our two houses before we bought one together, so I’m thinking that Allan considered that as our courtship. We really wanted to make a statement that we respect the institution of marriage, even though we were slow to act upon it.”

The popular couple actually made the announcement of their planned nuptials almost four years ago on the occasion of my and Sylvia’s 50th anniversary celebration. We were honored they chose that setting to deliver the news.

Like most others, we thought that meant it would take place in the near future. I suppose Allan would say that, based on their history, four years later qualified as the near future.

They met at UTA in the 1970s – Allan’s not sure of the exact date – when introduced by a mutual friend. He had begun his teaching career there in 1965 after migrating from the University of Oklahoma at Norman.

A big reception honoring Dr. Saxe’s 50 years of service to UTA was staged three years ago where he announced his plans to continue teaching in the Department of Political Science. That came as good news to students, as his classes are often over-subscribed as they seek the wisdom, wit, and style of teaching that has put him in the rare company of the most popular professors on the big campus.

My developing relationship with him was enhanced when I first sought the office of mayor. He wanted me to join him on his daily route delivering Meals on Wheels to people who had no other way to get the food they needed.

His purpose was to introduce me to a part of the community that he correctly thought I was not familiar with and needed my attention. When I accepted his invitation, he decided he could support my bid for office, and we became friends. I quickly learned that his and Ruthie’s passion for community service was extensive in both time and money.

Among Arlington’s philanthropists there are some who have given more money to non-profit organizations, but none has given a greater percentage of their wealth than has Allan. I can say this with confidence since he has spent his life basically giving away all he has. Aided by his inheritance from his mother, the total is estimated to be in the range of seven figures.

A partial list of beneficiaries throughout the area include hospitals, universities, churches, the Arlington Life Shelter, Mission Arlington, the River Legacy Foundation, the Levitt Pavilion, the Humane Society, the Fort Worth Zoo, baseball and softball fields – and the list goes on and on.

So much so that a few years ago he received the Greater Fort Worth Philanthropy Award. In accepting it he explained his motivation: “I cannot do anything, so I give to people and institutions that can. I am not a wealthy man. Life to me is so ephemeral and fleeting, so I donate to good places.”

Rather beneath the radar, he also demonstrates his actions as a role model. “Today’s students can be great if someone good leads them in correct directions,” he says. He has done just that, teaching leadership classes for the past 20 years in the Texas Rangers/Richard Greene Scholarship Program.

Ruthie’s devotion to Arlington’s libraries, beginning with the UTA system where she has worked for 43 years, includes service as the chair of the library board and its foundation. The lobby at the new Downtown Library opening this month will bear her name, as does the big stairwell at the Fort Worth Central Library.

After saying he would never quit teaching, Allan has recently begun to change his mind about that. “I do want to retire and be a greeter at the new library,” he says.

Such seems an appropriate role bringing the newlyweds (he’s 79, she’s 74) ever closer together in their new status while doing what they are truly famous for – serving others.