ACL is Putting Texas on the Stage

by Bailey Woodard
in Commentary, Featured
0 0
0

To put it frankly: if you haven’t heard of Austin City Limits Music Festival as a Texan, you are living under a rock. The festival has been gracing Austin’s Zilker Park since 2002 and Austin City Limits’s PBS performances have been taking the airways since the ‘70s. In short, ACL is Texas entertainment royalty.

It’s clear that Austin City Limits is a big deal for music, but it’s even more important to the many Texas artists, vendors and local organizations that they highlight each year. To get a glimpse of all that ACL had to offer, here is Arlington Today’s totally Texan breakdown of Austin City Limits Festival. 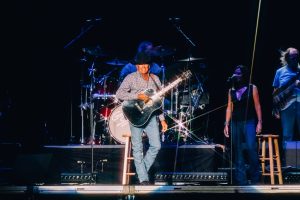 Headlining the festival this year was country music legend and fellow Texan, George Strait, taking to the Lady Bird stage Friday evening on both weekends. Some would think that with a headliner this strong, ACL would’ve been done promoting Texan artists, but the list of iconic and up-and-coming Texan performers didn’t stop there.

Earlier in the Friday afternoon, Houston’s own ‘hot girl’, Megan Thee Stallion took to the Honda stage across the park, twerking and spreading good vibes across the crowded audience. 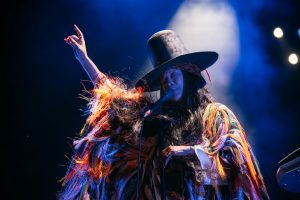 Dallas native, Erykah Badu took to the Miller Lite stage on Friday as well, giving a shout out to the DFW area where she was raised.

If you thought that this is where the list of Texan musicians stops, you’d be mistaken. Austin City Limits was packed to the brim with Lone Star-studded talent each day of the festival, highlighting well-known and debuting artists alike.

Austin City Limits is known for its hyper-local food vend 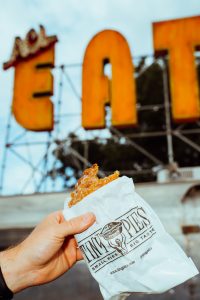 ors with popular Austin eateries lining the sides of Zilker for that mid-festival snack, but what really separates ACL from other festivals is its emphasis on Austin-based experiences through shopping, as well as eating.

In between concerts is the perfect time to wander around Zilker to see all of the festival and artists’ merchandise, grab a snack from the many different Austin eateries, or experience a boutique experience in the middle of Zilker with the Amex shop small market. This year’s market offered an array of clothing, art and accessories from the following: Austin Art Garage, Exit 82, Espacio Handmade, Leigh Elana, Mana Culture and Teyshaand Ubuntu Life.

Vodka lovers are well aware of the brand Tito’s, but Austin City Limits gave the opportunity to learn about the company’s Austin roots with Tito’s Party in the Shack. The vodka distillery had a stand offering bandanas, glasses and more and opportunities to listen to incredible artists at their Tito’s Handmade Vodka Stage.

Don’t worry, if you’re not in the spending mood for every concert break, because if social media has taught us anything, it’s that ACL is full of Instagrammable moments. We’re all aware of the iconic Austin City Limits flags, but this year the festival brought in Austin muralist, Zuzu, to create ACL Fest Frame Art perfect to capture those picture perfect moments from the festival. 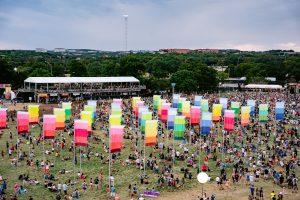 Austin City Limits Music Festival takes up a good chunk of Zilker Park during its two week stay, but the festival has made an effort to leave the park better than they found it. Teaming up with the Austin Parks Foundation Rock & Recycle, festival goers have the opportunity to get a free shirt by collecting recyclable goods from the festival grounds. Not only did this offer a fun way for ACL attendees to grab some free merch, but helped manage the inevitable litter from the festival, keeping the park clean.

Austin City Limits Music Festival is just that: a music festival. But at the end of the day, it’s a showcase of all that the city of Austin, and Texas as a whole, has to offer. By coming together each year to support local businesses, to support local artists, to support local organizations as a community. I could go on about the spectacle that is ACL, but the only way to truly embrace the festival is to experience it yourself next year.