A roadster with starring roles

This 1954 Jaguar XK120 Roadster has plenty of oomph, plus features that set it apart in a crowd. It’s no wonder this vehicle is a movie star. (Photos: Richard Greene)

We’ll start this month’s car feature with a pop quiz:

Millennials may wonder who they are, while their parents and grandparents will instantly recognize them all from their award-winning careers across the silver screen from decades past.

In any event, the rather obvious answer to our little question will come quickly – all of these famous actors had a Jaguar XK120 Roadster like the one you see here.

There were lots of others, and some of them may have fallen in love with this car that, according to the Internet Movie Cars Database, appeared in more than 200 movies and television shows. The first one was likely the 1954 aptly-named “Fast and the Furious,” promoted as “A trucker framed for murder breaks out of jail, takes a young woman hostage, and enters her sports car in a cross-border race hoping to get to Mexico before police catch him.” 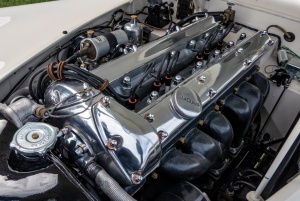 The Jaguar was selected as the vehicle of choice for such a story line because it got its name by reaching a top speed of 120 miles per hour – a remarkable feat for a production car in the Post WWII era.

Another famous celebrity also has a special connection to this roadster. Jay Leno’s first sports car was the 1954 Jaguar XK120. His current collection of something in the range of 170 cars all began with a white one like the reborn beauty on these pages.

It belongs to a car dealer in Jackson, Mississippi, a client of Arlington’s Robert Massengale, whose restoration skills have produced a perfect version of this highly collectible vehicle.

Jaguar produced the XK120 between1948 and 1954. The company made just over 12,000 of the open two-seater that was, at the time, the world’s fastest production car. The very first one in 1949 was delivered to aforementioned Clark Gable. 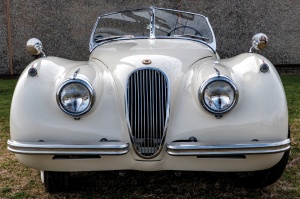 The 3.4 liter inline-6 engine was highly advanced for a mass-produced vehicle of the time. With a dual overhead camshaft, dual side-draft SU carburetors and twin exhaust pipes, Robert has tuned this one to make it more powerful than a standard 12-cylinder engine.

Even without the modifications the roadster achieved its first race victory in 1949 at Silverstone Circuit, England, with a reported top speed of 124.6 mph. 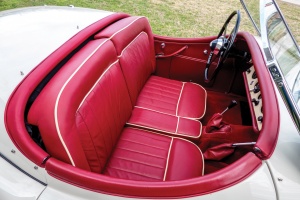 The next year, its first victory in America came in a race at Palm Beach Shores, Florida. Then, in 1954, it became the first imported car to win a NASCAR Grand National road race. Foreign made cars were then banned from this series after that event.

With those kind of racing credentials, together with its sleek sports car appeal, the car saw its popularity soar. You could have bought one of the originals when it first appeared in dealers’ showrooms for about $1,500.

With values increasing steadily in recent years, today you would need to be willing to part with $100,000 or more for one like Robert has restored for his Mississippi collector client. 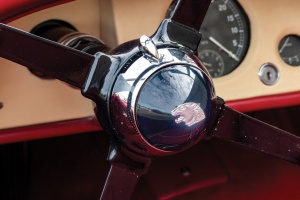 A recent Bloomberg article reported that most buyers purchase the car for passion rather than to make money. Enthusiasts say few collectors of beautiful objects admit to buying them for purely investment purposes.

After months of work to produce the results of authentic detail to ensure its perfection, Robert concludes his journey with this car to be a true labor of love.