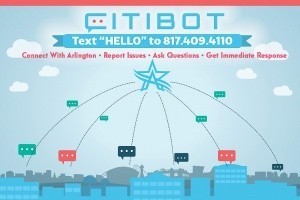 The City of Arlington has launched Citibot, an interactive text messaging tool that provides a new way for residents to report issues in the community, such as potholes or stray animals, or find information about city services and events, such as permits, public meetings or trash and recycling pick up dates.

With Citibot, residents and visitors throughout The American Dream City can text a short question, such as “How do I get a pet license?,” and an interactive chatbot will reply with a relevant link to information available on the City’s website. Users can also text key words, such as recycling pickup or street light, to report an issue by street address. When the City fixes the reported issue, Citibot will follow up to let the person know their query has been resolved.

“We’re always looking for ways to put technology to work and offer our residents easier ways to report and resolve issues in their neighborhoods,” says Jay Warren, director of Communication and Legislative Affairs for the City of Arlington. “With Citibot, one text is all it takes to streamline the reporting process for residents, allowing them to make The American Dream City a better place to live, learn, work and play.”

Arlington is the second city in Texas – and the largest – to implement Citibot. The City will test the service’s functionality and how residents use and embrace the technology as part of a one-year pilot program funded by the Arlington Tomorrow Foundation.

Based in Charleston, SC, Citibot LLC was formed in 2016 with a mission of making cities and counties accessible for all. Bratton Riley, Citibot’s co-founder and CEO, was inspired by the evolution of the conversational chatbot and its ability to help governments be more accessible and accountable to every resident.

“People’s expectations of high-quality customer service are ever-increasing,” says Riley. “Cities like Arlington are leading the way by delivering powerful solutions to maximize efficiency and enhance access to information and vital services.”

Citibot is a tool for residents and their governments to use for efficient and effective communication and civic change. Citibot empowers residents to solve problems in their community and get questions answered immediately via text message. For more information visit citibot.io or connect with Citibot on Facebook