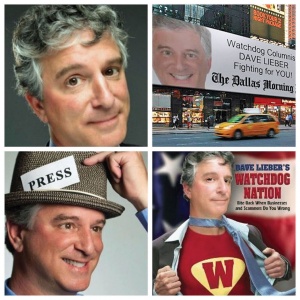 Arlington on Tap’s speaker for May, Dallas Morning News consumer affairs columnist Dave Lieber, has so many potential topics that he hasn’t yet settled on a theme, but this much is certain: It’ll be both funny, slightly unnerving and enlightening.

Arlington on Tap coordinator O.K. Carter has considerable experience with Lieber. When both were working at the Fort Worth Star-Telegram, the two would tag-team assorted legislators in Austin during lawmaker sessions.

“Lieber has an innate gift of seeing the funny side of pretty much everything, including the Texas Legislature,” Carter recollects. “That’s a handy characteristic, since at the time my philosophy was more along the lines of no man or his property are safe when the Legislature is in session. I suppose it pays to have a little attitudinal balance. I prefer to think that the Star-Telegram sent me to Austin for a centered approach and Dave for an off-center perspective.”

Besides Lieber’s role as consumer affairs columnist – he prefers the term “watchdog” — the prolifically productive writer is also the leader of Watchdog Nation, a consumer rights movement spreading across America. He’s also the author of eight popular books, the latest being “Amon,” which is also a one-man play about legendary Star-Telegram publisher, philanthropist and promoter of all things West Texas, Amon G. Carter. Though the geography is suspect, Carter persistently insisted West Texas begins at Fort Worth.

“Amon” the play made its debut this very month and is consistently selling out at Artisan Center Theater, the largest community theater in the DFW region,” Carter says. “The colorful – some would say eccentric  – Amon Carter ran the state’s largest newspaper as well as the biggest radio and TV stations in Texas.

“I would expect Lieber to have a few words about ‘Amon,’ and he might also indulge Tap attendees with his experiences making the transition from being a New Yorker to Texan. I was astonished once to hear his woeful tale of being fired from the cast of the Metropolitan Opera, putting out the lights on his budding musical career. Then I discovered he was in the children’s choir component and lost the gig when his voice started cracking at puberty. Good story, though.”

Lieber is also co-founder of one of North Texas’ largest children’s charities, Summer Santa, which serves thousands of children each year through a volunteer service that has no office or paid staff. His work for Summer Santa earned him the Will Rogers Humanitarian Award, which goes to the U.S. newspaper columnist whose work produces positive effects on the lives of readers.

“Lieber’s appearance will wrap up the third Arlington on Tap season,” Carter says. “It’s been an eclectic group of lectures with topics that ranged from bullet trains, north Arlington dinosaurs and the demise of newspapers to playwright Lieber.”