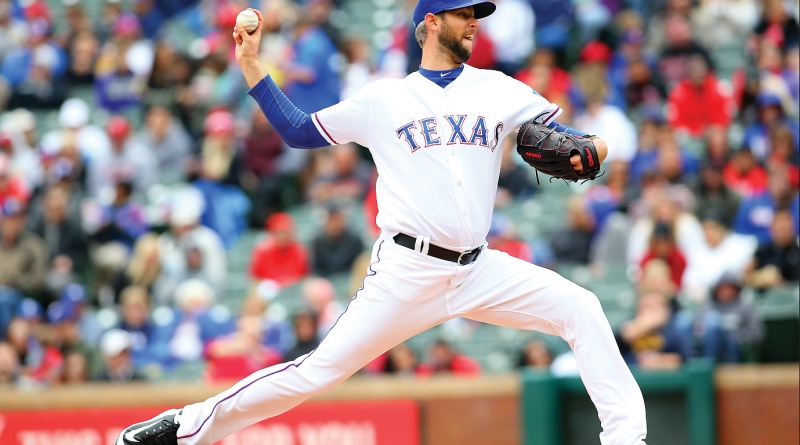 Do you remember what you were doing on July 11, 1995? I am only guessing, but, based on the age of my daughter, I would suspect that I spent part of the day warming formula and changing diapers.

Rangers pitcher Chris Martin remembers exactly where he was and what he was doing that day. Nine year old Chris was at (what was then known as) The Ballpark in Arlington, and he was falling in love with baseball.

Chris, who grew up in Arlington, had a friend whose dad had tickets to the first-ever All Star Game played in North Texas. “That’s probably my biggest memory,” Chris wistfully recalls.

The 66th midsummer classic began as they all do now, with Monday festivities; Chris was in the seats on that day, too: “I sat right behind the dugout and fell in love with Frank Thomas and Ken Griffey Jr. in the Home Run Derby.”

He was back behind the dugout the next day and watched the National League beat the AL 3-2. “I was at that game!” Chris proclaims with the enthusiasm of a nine year old. “That’s probably one of the experiences that made me love this game – that day.”

It is also one of the reasons he loves where he grew up. Right here in Arlington. He also loves what he found when he got to Arlington High School, a breeding ground for major league baseball players like Hunter Pence.

“Apparently Chris Martin was a freshman when I was a senior,” Pence says. “But he was like 5’4” then.”

“I was a freshman,” Chris says almost apologetically. “I wasn’t even on the map yet. I hadn’t hit my growth spurt.”

With his growth spurt seriously behind him, the 6-foot, 7-inch Martin is in his second season of what he calls “A dream come true.”

He is playing for the hometown team and pinching himself most every day. “Driving to the park every day is still a crazy feeling,” he says.

Driving around Arlington or going to visit his parents, who still live near Martin High School– that is not crazy.  On the contrary, it is very familiar. “It is like driving down memory lane,” Chris says without hesitation.

“It’s funny, I drive with my wife, and I pretty much know every inch of Arlington. I will be taking back ways and she’ll be like, ‘Where are you going?’ And I’m like, ‘just trust me!’”

Finding his way around his hometown is a lot easier than finding his way to the big leagues. After his time as a Colt he played for McLennan Community College. A shoulder injury there caused him to give up the game. After three years of working in a warehouse he discovered his arm felt good, so he tried out for the Grand Prairie Air Hogs.  That lead to a chance with the Red Sox organization, which traded him to the Colorado Rockies. He spent 2014 in Colorado and 2015 in the Yankees organization.

Next up, two years in Japan playing for the Nippon Ham Fighters and then, finally, a chance to come home. “Fortunately, coming back from Japan the Rangers were really interested,” Chris recalls. “It was a no brainer for me. Being that far away and to get to come home and be this close.”