by ArlingtonToday Magazine
in Community, Design and Interiors, People
0 0
0 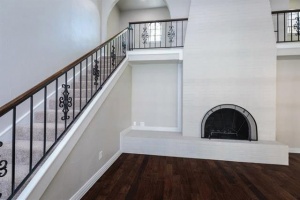 As David and Courtney Waller searched for a new home for themselves and their young son Graham recently, their wish list started with a desire to acquire something older that had been updated.

As Nicky Austin and Ken Hanshaw sought to find a purchaser for a South Arlington house they had on the market, they promoted it as an older home that had been given a new life via a transformative cosmetic overhaul. In the real estate version of “The Match Game,” this is what’s called a “win/win” situation, and late last year the Wallers’ victory culminated in the purchase of a nicely located and constructed – and renovated – dwelling with all the “fixings” the Wallers had imagined when they started their quest for the ideal home.

It sits in a neighborhood defined by ample amounts of flora and fauna, what with towering trees providing shade and wild guinea birds roaming the neighborhood.

Likewise, Austin and Hanshaw came away as winners in their shared quest to sell well-preserved, but cosmetically dated abodes that become like new again with the allure of some modern TLC (tender loving care). As the photos accompanying this text attest, the home was a veritable sleeping beauty just waiting for the prince’s kiss – in other words, just what the Wallers were hoping to find. 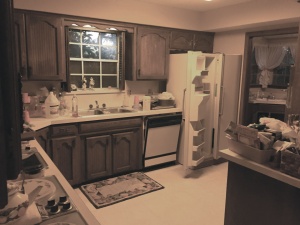 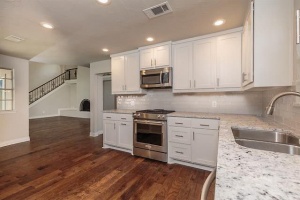 The neighborhood sold itself. Though Graham is about to turn one, he will be of school age soon enough, and the home is located near a couple of schools. The house proper has roughly 2,660 square feet of room and contains four bedrooms, three baths and an office, which is shared by Courtney (a registered nurse in a neonatal intensive care unit) and David (who works for the Goodyear Cotton Bowl Classic at AT&T Stadium).

Courtney says the first time they drove to see the home, the couple was impressed by the surroundings. “The neighborhood was built in an old pecan orchard, so the trees create a wonderful canopy over the streets and homes,” she says.

By the time they stepped inside the front door, pictured to the right, the “before” look depicted in the photos on the first page of this story had been supplanted by fresh paint, new floors, era-appropriate fixtures and windows that provided breathtaking views almost everywhere they looked.

It wasn’t long before the Wallers decided that this would be their new home.

Courtney admits that it was pretty much a “love at first sight” experience as she and David made their way though the spacious living areas and bedrooms separated by an elegant staircase that, ironically, became the impetus for the process that led to the house ultimately becoming what it is today. 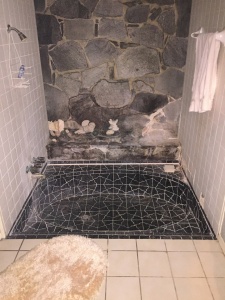 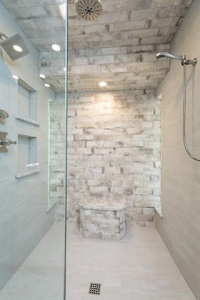 Austin says one the original owners suffered from health problems, which made navigating the stairs almost impossible. After that couple purchased a new home and moved, they maintained ownership in the hopes that someday they could sell it to someone who would put the love and attention into the house to make it the showplace it was when they purchased the house many years ago.

Austin and Hanshaw made the renovations happen, and the result was that the previous owners and the Wallers both got their wishes.

“We wanted a turn-key home that we could settle into and enjoy immediately upon moving to allow more time to create precious memories with our son,” Courtney says.

Though that process, like their son, is in its infant stages, Courtney says she and David are already beginning to see new memories being made.

David quickly took to the office. Courtney says it’s his favorite part of the new house “because it’s a place he can go to relax and read.” 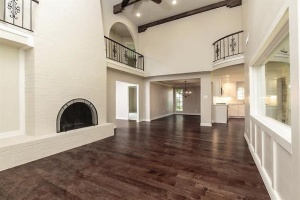 She loves to cook, so it is no surprise that she notes that the kitchen has quickly become her favorite room.

“And Graham loves the open concept living area because he has plenty of room to play,” she says.

Three months into any dwelling doesn’t provide much time for entertaining, but the Wallers will change that soon, as they’re preparing to host their first party at the new home in celebration of their son’s first birthday, which will take place later this month.

Before and after that, the Wallers plan to let their home help define how they spend their time there.

“The floor plan is ideal for us,” Courtney says. “The master bedroom and nursery share their own wing separate from the main living area. Once Graham and his future sibling get older, they will have bedrooms upstairs that have a Jack and Jill bathroom.”

Austin and Hanshaw, meanwhile, will also share special memories associated with the house, as it represents the culmination of something they set out to do as real estate partners on a number of “fixer uppers” – namely showing the value of melding old with new.

“Ken and I have partnered on more than 50 of these houses over the years with the goals of: (1) maintaining the integrity of the neighborhoods; (2) helping Arlington be recognized as a wonderful place to raise your kids; (3) getting past the stigma that Arlington is ‘old’ and (4) helping people see the value in these great, existing neighborhoods with the draw of the new amenities,” Austin says.

With the sale of this home to the Wallers, that mission has been accomplished. And everyone won. 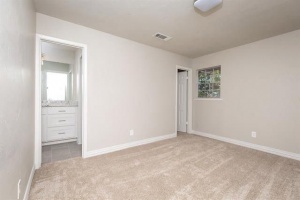