I don’t hug, but I could use one

Kenneth Perkins has been a contributing writer for Arlington Today since it debuted. He is a freelance writer, editor and photographer.

by Kenneth Perkins
in Commentary
0 0
0

My much better half is a hugger. It’s what I like least about her. She hugs folks she knows only slightly or even not at all.

These embraces, tight and sincere, are famously non-discriminatory. She hugs the postal guy, the lawn guy, the pool guy, the cable TV guy, the JC Penny saleswoman who alerted her to the sales loophole offering an extra 10 percent off window coverings. No kind deed goes without a warm embrace from this woman.

This problem isn’t hers. It’s mine.

I am, and have always been, an anti-hugger, one of those stiffs who lurks awkwardly in the background as folks swing arms around one another when coming or going. I’m the dude who arrives late to shun the collective embraces and leaves early to avoid the inevitable goodbye hugapalooza.

Thing is, when the Much Better Half hugs, standing there, as if next in line, I’m expected to follow suit. I usually do, though tentatively, awkwardly, painfully.

Which explains why this whole coronavirus thing is a rather odd, ironic twist: The Much Better Half has been stripped of her hugability. 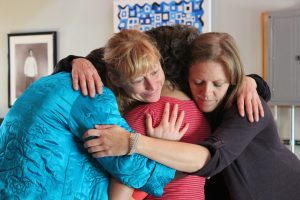 At first it seemed like a revelation. Now I’m not so sure.

When Mayor Jeff Williams instituted this whole Kindness Initiative a while back, calling on residents to perform random acts of kindness, I was all in, as long as it didn’t include hugging. While reporting on the story, I remember asking Williams whether I could be kind without actually hugging someone. I was joking – kind of. He looked a bit dumbfounded. I changed the subject.

Driving around Arlington the other day, passing by The Parks Mall, snaking through The Highlands and ending up at Costco in search of toilet paper (can’t find any), I notice the panic and worry in people’s faces and wonder what a great time to think about kindness.

Especially when it came to taking fewer pallets of toilet paper so others can have their share.

At the McDonald’s on the corner of Cooper and Pioneer, I ask a 30-ish woman in a power suit and high heels whether not being hugged bothers her. She thinks about it for a bit, and then says, “I’m not much of a hugger so I don’t know if it’s that big of a deal. But my sister hugs people all the time. It’s like she’s addicted. (I tell her I feel her pain)  So for her, she’s about ready to jump off a bridge, probably.”

One of the McDonald’s workers sweeping up around us gets in on the conversation, saying what we need now more than ever is that hug, a sincere embrace that tells someone “I care.”

We joke that in our new world of social distancing it’s impossible to hug standing six feet apart. Yet we need it, even when anti-huggers like me find it excruciating.

That’s because we need human touch, or what a psychologist friend of mine calls “skin hunger.” She tells me this term is based on actual research studies showing how touch – particularly hugs – is able to communicate a wide range of emotions and is considered a vital social tool. “It even reduces your levels of stress hormone cortisol,” she says.

High levels of stress hormone cortisol means anxiety, low energy and even depression. I looked it up.

So what does that mean now for a society that can’t touch? There’s a moment in most churches where parishioners are asked to “greet your neighbor,” with a handshake or (yikes) a hug.

At New Life Fellowship, where I attend, we went from hugging one Sunday to waiving the next to meeting via streaming as big gatherings were being discouraged.

“We can’t do the things we normally do,” Senior Pastor Dr. Maurice Pugh tells us, by teleconference, no less. “This is hard. We can’t hug and touch hands.”

We can’t. It is hard. Even for an anti-hugger like me.