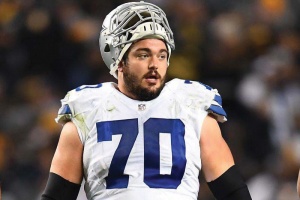 Not a day goes by here in North Texas when we don’t hear something about the soil in this area and about our need to ensure that we have done what we can to solidify our foundation. “Your home is your greatest investment …” the advertisement reminds us, “so you should protect it by calling fill-in-the-blank foundation.”

Among the moves made was the contract extension for Zack Martin. When the Cowboys and he agreed to a six-year, $84 million dollar contract, he became the highest-paid guard in the history of the NFL. In fact, the next closest signed a deal for nearly $20 million less than Zack. It was the kind of move that proves the Cowboys are serious about building a team the correct way, from the inside out. Martin has been to the Pro Bowl in each of his first four seasons and, perhaps more impressively, was named first-team All-Pro in 2014 and 2016. In ‘15 and ‘17 he was second-team. He is the real deal and among the best offensive lineman in the game.

The Cowboys now have three first-round picks on the offensive line, and all are signed to long-term deals. Travis Frederick and Tyron Smith are signed through the 2023 season, and Martin will be a Cowboy through 2024 and perhaps beyond.

Pro Football Focus says the Cowboys have the fourth-best offensive line in the league. Only the Falcons and the two teams that played in the Super Bowl, the Patriots and the Eagles, are deemed better. The Cowboys feel their line actually got better this off-season.

They used a second-round draft pick on a lineman from UT. His name is Connor Williams, and he was taken with the 50th overall pick. He was a stud in the Longhorns program, and he has a story to tell. If you did not see his pre-draft thank you note you should Google it. Connor wrote a heartfelt thank-you to all of the kids that bullied him while he was growing up in Coppell. He tells them that if not for their isolation, harassment and constant torment he would not have made it to the NFL. He is here now, and with the hometown team he will make the offensive line deeper and better.

Of course, there are two sides to every story, and the other side of the Cowboys line story is the defensive line. It too, was addressed this off-season. In fact, it has been addressed in each of the past two drafts. In 2017 the Cowboys used their first-round pick on a defensive lineman from Michigan, Taco Charlton. While his rookie season may not have been spectacular, he has a bright future.

This year they spent a fourth-round pick on a defensive end from Kansas. Dorrance Armstrong Jr. is a Texan from North Shore High School in Cloverleaf. The 116th overall pick was second in the Big 12 in sacks his sophomore year, then he had 10. He declared eligible for the draft after his junior year in Lawrence and joins the Cowboys as a baby at just 21 years old.

The Cowboys defensive line is in the top 10 in the league, and the offensive line is in the top five. This is how you build an NFL team. Surround those men with the likes of Dak Prescott and Zeke Elliott, and you have the makings for a serious rebound from the 9-7 record of a year ago. Zeke will not be suspended or as distracted this year, and Dak will have a new cast of receivers with whom to bond.

Training camp begins later this month in California, which allows us to close the door on 2017 and open the window on 2018. Fear not – the doors and windows will open and close easily. There are no foundation issues here.