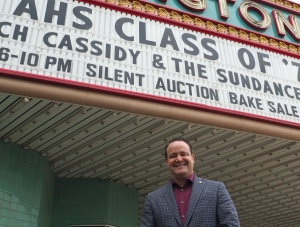 And why not? That systemized, highly attentive style worked for the 48-year-old entrepreneurial Texas Aggie alumnus when he was starting out in residential real estate, continued paying dividends when he ventured into commercial and franchise properties and still sends regular checks to the bank for the betterment of his investment group, which these days mostly focuses on enterprises like taverns – his investment group owns several – or restaurants, of which there are also a couple.

All of which begs inquiry: Why-oh-why did Moon – who is also Fort Worth City Councilman Moon – decide to venture into the volatile, fickle and hard-to-figure music business?

Moon, at the Center Street theater recently in the aftermath of a stopover and campaign pep talk by Senator Ted Cruz (the theater hosts more than musical performances), shrugs his shoulders at the question as if he only knows part of the answer and is figuring the rest out as he goes.

A big part of the answer is the same as his careful reply to the question of why he became involved in Fort Worth politics: He finds it interesting and relishes the community service aspect. It also helps that his pockets are deep enough to do both.

There’s also this: He didn’t originally intend to buy Arlington Music Hall or the adjoining building that houses Babe’s Chicken. What he meant to do was purchase the smallish adjoining lot at the corner of Center and Division streets for another of his investment group’s taverns. That was three years ago.

“It seemed to me that downtown Arlington was about to boom and that it was a good neighborhood for that kind of tavern investment,” Moon recollects.

Owner Burk Collins most certainly wanted to sell the lot, but as the conversation evolved, Collins also suggested to Moon that maybe, just maybe, he should think about buying all of it.

Moon still hasn’t built the tavern (it’s scheduled to open next year), but one thing led to another, his interest steadily growing, and next thing he knew he owned a 1949-built former movie theater, turned church, turned county music center, and he was seriously in the music business.

Not that music was a foreign concept. His engineer father was also a serious gospel singer and frequently took his young son to assorted concerts starting at an early age.

“I really like live music,” Moon says simply. To that, he should add that he likes big-name musicians.

On average the revamped theater hosts two to three shows a week. Acts like Pure Prairie League and Fleetwood Mac. Bobby Bare and Willie Nelson. Add to those a steady diet of national touring tribute acts saluting the likes of Ricky Nelson, Pink Floyd, and Elvis. The theater also headquarters the Arlington Symphony and hosts an occasional Fort Worth Opera performance. It’s an intimate, close-up venue, the capacity just over 700 via wide, comfortable and new seating. Moon books the acts himself, enticing big-name performers by collaborating with other Texas theaters for multiple bookings.

It has not come easy, Moon calling the live concert business “The hardest thing I’ve ever tried to do.”

Clearly, he’s doing it well. Upcoming acts include B.J. Thomas, Spyro Gyra, Larry Gatlin, POCO, Tanya Tucker and others. It’s big-time entertainment, and Moon is enjoying a most excellent adventure in the process.