by ArlingtonToday Magazine
in Business and Education, Community, Featured, People
0 0
0 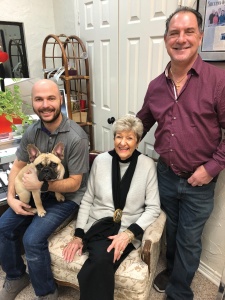 In Mansfield, everything that glitters probably came from the Pressley family.

For the past 35 years, the Pressleys have put custom-designed diamond rings, wedding bands, gold bracelets and earrings on the better part of the city’s residents. With the third generation now a part of Mansfield Fine Jewelry, the legacy and future seem secure.

But none of them set out to be jewelers.

Matriarch Alma Pressley, 79, had taken a class to turn her late husband’s rings and tie tack into pieces for her three children, and she got hooked.

“People would give me pieces and I would make them something and they would pay me for it,” she says. “The extra money was wonderful.”

She was working three jobs to support her family, and soon started dreaming of opening her own store. With a $5,600 loan from her attorney James Cribbs, she opened her first shop – the city’s only jewelry store – in a storage building behind her house on Oct. 1, 1983.

Within a few months, she had repaid the loan and a year later expanded the store and quit all of her other jobs. In 1986, Pressley approached Cribbs with a plan to build a large building with other units for tenants on the property next to her house. This time she asked for $180,000, so Cribbs took her to a bank to secure a loan.

“Little did I know he was on the note,” she says.

John Pressley was also growing. Always artistic, he studied under experienced jewelers for almost four years in the family store before feeling confident enough to go it alone.

“You have to approach every job differently,” he said. “You have to determine the best method to get the end result. I enjoy being able to repair a piece and put it back to how it was originally.”

Customers appreciate that their jewelry doesn’t leave town to be repaired.

“This is my West Point ring; they were only made for one year,” says Mino Sorenson of Mansfield. “And this is my grandfather’s wedding ring. (My grandparents) were married for 70 years. They can’t be replaced. They were able to do what we needed without sending them off. They did a good job.”

John Pressley knows that the value of jewelry is a lot greater than the cost of the stones and metals.

Thomas Pressley, 26, has grown up in the store and understands his family’s legacy. He is putting his own stamp on the family business, using computer-assisted design drawing to create custom jewelry.

While his dad had to carve out a mold using the lost wax method of casting, Thomas Pressley can draw it on the computer, and the machine grows the mold.

“We can design any type of jewelry,” he says. “I can make it precise to fit anything.”

So far, his proudest achievement has been making his sister’s engagement and wedding rings and her husband’s wedding ring, which was created using his late father’s wedding band.

Even though he is the new generation, Thomas Pressley admires the way his family has run their business.

“Granny and Dad have done things right,” he said. “Customer service has advertised us more than anything. If you buy something from us, we’re going to be the ones that take care of you.”

In 2015, Alma Pressley decided that she had to write the family story.

“I needed to write it to dedicate it to Mr. Cribbs and what he did for me,” she says.

She wrote the book, “The Jewelry Thing,” in one night, then took three years to edit and self-publish the story, which is now in its fourth printing because she keeps giving them away.

“I’ve been a parishioner of St. Jude Catholic Church for 70 years, since it was St. James,” she says. “My faith, my family and friends have always been my angels in my battlefield of life. I don’t have any plans of retirement. I hope that (Mansfield Fine Jewelry) sustains itself with Thomas and John. They have the talent and ability.”