Renewing tradition: Dragon boat race will be held at Viridian

by Bailey Woodard
in Arlington News
0 0
0 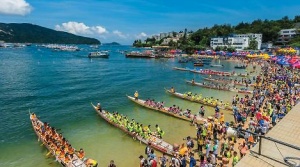 The event, being held here for the first time, is rooted in the story of Qu Yuan, a minister in one of the warring state governments of ancient China who had been slandered by corrupt, jealous ministers. Eventually, Qu Yuan is said to have waded into the Miluo river. Upon learning about his suicide, people rushed out on the water in their fishing boats to try to save Qu Yuan. People beat drums, splashed the water with their paddles in order to keep the fish and evil spirits from his body, and scattered rice into the water to prevent him from suffering hunger.

Their efforts spawned a Chinese tradition in which people hold dragon boat races annually on the day of his death. Today, dragon boat festivals continue to be celebrated around the world with racing highlighting events than also include many forms of entertainment.

The Arlington event will feature Mayor Jeff Williams and his wife Karen as honorary chairs. Education partners include the University of Texas at Arlington, Tarrant County College District, the Arlington Independent School District and the AISD Board of Trustees.

Where: Arlington Museum of Art

In a nutshell: This exhibit demonstrates the majesty of the Western American landscape. Donray’s technique captures the beauty of the natural world while commenting on the silent danger that exists out in the open, secluded space. The cacti and other flora pierce the landscape in dramatic style. This exhibit includes 30 paintings and pastels.

In a nutshell: With a 60-foot-diameter dome and its state-of-the art Digistar 5 DLP Projection system, The Planetarium at UT Arlington is one of the largest and most sophisticated in the state of Texas. The Digistar 5 system can project stars, planets, galaxies and virtually anything else onto the dome.

In a nutshell: Your Texas Rangers will continue their quest for the 2019 American League championship by hosting the following series this month: the Oakland A’s (June 7-9), the Cleveland Indians (June 17-20) and the Chicago White Sox (June 21-23).

The Most Known Unknown Reception

In a nutshell: The Arlington Museum of Art is holding a reception for the Most Known Unknown Exhibit, showcasing work by artist Trey Wilder. Attendees can enjoy live music and food in the rooftop gallery overlooking the Downtown.

In a nutshell: TED is a nonprofit organization devoted to Ideas Worth Spreading. TEDx is a program of local, self-organized events that bring people together to share a TED-like experience. TED Talks video and live speakers will combine to spark deep discussion and connection in a small group.

In a nutshell: The Harlem Globetrotters® are legendary worldwide, synonymous with one-of-a-kind family entertainment and great basketball skills for the past 93 years. Throughout their history, the Original Harlem Globetrotters have showcased their iconic talents in 123 countries and territories on six continents, often breaking down cultural and societal barriers while providing fans with their first-ever basketball experience.