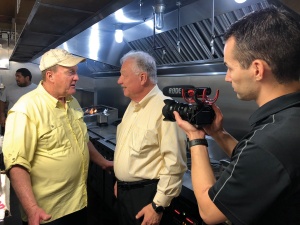 Darryl Haynes spent a dozen years serving on the Mansfield City Council, and he’s not done serving his city yet. Haynes lost his bid for a fifth term last May, but now he has found a new way to shine a spotlight on his hometown with “Meeting Mansfield,” a video series that features local businesses and their owners.

“Darryl came up with the idea because he wanted to continue to bring awareness to Mansfield after his city council career ended,” says Allan Hudson, who is taping the series.

Haynes and Hudson began filming the videos at the end of last year and plan to launch them this month on Facebook and YouTube. So far, the duo has filmed at Southern Champion Tray, Harvesting International Ministry Center and Steven’s Garden & Grill, but they have a long list of Mansfield businesses they want to feature.

Haynes submits the questions to the business owners or managers in advance, then conducts the interviews. “I want to know why they came to Mansfield, why they’re so successful and hear about their vision,” he says.

Hudson tapes and edits the videos.

“Each video, the original plan was three to five minutes,” Hudson says. “Everybody Darryl talks to has so many good stories about Mansfield that they’re running about 10 minutes.

“There’s a lot of history with the people we’ve interviewed already,” he continues. “We’re going to have to come back and do a 45-minute documentary on all the stories we’ve got.”

Haynes has a long history of listening, as a council member and as a risk manager. Hudson has also made a career out of serving, in the U.S. Air Force and currently as a Mansfield police officer.

“This is a way for me to serve with my media company, too,” says Hudson, who owns Hudson Media Group.

Neither is making any money on the venture. They hope to eventually sell advertising to pay for expenses.

“It’s going to take 12 to 18 months to catch on,” Haynes expects. “This is like a foundation. We want to attract business to Mansfield. We need someone telling them we’re here. All those years on the city council and no one is tooting our horn.

“My profession is talking to business owners and CEOs,” he continues. “I talk to thousands and let them know we’re here. Come to Mansfield and meet the people.”

John Cox, who owns Steven’s Garden & Grill with his wife Jan, believes the video on his restaurant will help his business and Mansfield.

“I thought it was very professional,” Cox says. “Darryl being a city council member, he’s a people person. Darryl is very in tune with what we want, to bring awareness to Mansfield. When people see the video, they’ll be able to see why Mansfield is a unique place.”