Saving the Rangers 28 years ago

Editor’s note: This month’s Finish Line is one in an occasional series that former Mayor Greene calls “How our community was shaped by ten things that didn’t happen.” This month’s commentary is about the ninth of those ten things. 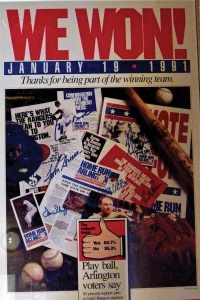 Now that our baseball stadium is in its final season, a look back at the past three decades provides an opportunity to celebrate – again – the can-do spirit of Arlington that produced The Ballpark in Arlington and spawned all that has happened since.

From the moment the transfer of ownership of the Texas Rangers Baseball Club was announced at a news conference in 1989, it seemed to most that the future of the team would unfold in Dallas.

My own reaction was something very different. For almost half a century, Arlington had been seizing the opportunities and meeting the challenges that have always defined our town. I had no doubt that the legacy long established would ensure that my fellow citizens would have my back when we went to work to protect what was ours.

My contacts with the new owners’ managing partner, who just happened to be the son of the president of the United States, produced an important answer to my questions about their plans. George W. Bush promised me that they would discuss their future with Arlington before they did so with any other city.

It was vital that we were totally prepared when the call did come that the Rangers were ready to talk. With that certainty foremost in my mind, I proceeded to assemble a team of every kind of consultant and practitioner that had professional knowledge of anything about building a new ballpark.

We called in lawyers, engineers, an architect, contractors, traffic planners, land planners, accountants, bond counsel, Wall Street advisors, and consultants with knowledge of how recent ballpark deals had been structured. There was no problem getting all these people to work with us pro bono because it provided them with access to the project without any of them being promised anything other than the opportunity to be introduced at the appropriate time.

In the end, all the time and effort we put into getting prepared paid off in a very big way. Rangers’ owners would later tell us that no other city had anything beyond some simple drawings and layouts to show and that none had done the research or had the knowledge or any answers to any level of detail that we presented and were prepared to address at every point in the discussions.

We had succeeded in getting ahead, staying ahead, and setting the bar out of the reach of our competitors. It was the smartest thing we could have done.

When the Rangers owners selected former Texas legislator Tom Schieffer as their partner who would negotiate a proposal with us, we were more than ready. After a couple of meetings between Tom and me and then with all of my colleagues on the city council, we crafted what we thought would be a win-win arrangement in a public-private partnership to build a state of the art baseball park – the finest in the country.

The campaign that then developed produced the most rigorous contest in the city’s history.

Election day saw the largest ever turnout of voters for just a single item on a ballot. I was very optimistic about winning the approval of Arlington voters. After all, I had seen what they had done over and over when the question was making their city a place to be proud of – a place where they and their families could enjoy a quality of life like nowhere else.

I was right about that as evidenced by a victory of landslide proportions with nearly 65 percent of voters saying “yes” to the city’s future.

Across the street now stands AT&T Stadium and Texas Live! Adjacent is the new 300-room Live By Loews hotel set to open in August, providing marvelous views of the development of the new enclosed Globe Life Field that will provide players and fans an experience free from the Texas summer heat beginning on Opening Day in 2020.

When the final game takes place this fall in The Ballpark in Arlington, we’ll mark time from when it all began and created memories for a lifetime. It’s all about Arlington, and its people, who didn’t miss the opportunity 28 years ago that set into motion all that has taken place since.