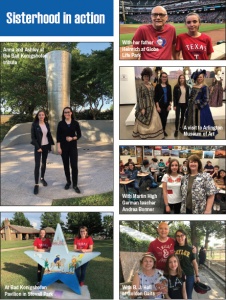 Now in its 67th year, the bond of friendship between Arlington and our sister city of Bad Konigshofen in Germany is moving into the hands of the third and fourth generation in both communities.

Our granddaughter Ashley joined with others here to host the visit of 16-year-old Anna Blum, who traveled here for her first time last month to discover the place where the relationship between the two towns was first established.

Anna’s grandparents were among the residents of Bad Konigshofen at the time when many were recipients of essential supplies from Arlington citizens in 1951 to support the daily lives of people struggling to recover from the ravages of the second World War.

Accompanied by her father Heinrich, who has made multiple trips here and served as a gracious host of Arlington visitors to Germany in past years, Anna was immersed in non-stop activities that began immediately upon her arrival.

After lunch at Spring Creek Barbeque, she toured downtown, where she saw the train station platform where three boxcars of clothing, shoes, household items, and other materials were sent on their long-ago journey to her hometown.

She attended an exhibition of American movie wardrobes at the Arlington Art Museum and took in a performance of “Footloose” at Theatre Arlington. She was introduced to Arlington folks all around at both occasions.

Accompanying Ashley to her Martin High School classes the next day provided the opportunity to engage with her contemporaries. A highlight of the experience was to visit an advanced German class and discover those here learning to speak her native language. Anna speaks fluent German, English and French.

She shopped at the Parks Mall for a prom dress, attended the annual Martin Band Banquet at the Fort Worth Museum of Science & History, took a horse ride at Golden Gaits Stables, visited the Bad Konigshofen Aquatic Center in Stovall Park, and capped it all off with a day at Six Flags Over Texas.

She even got to see the Texas Rangers play the New York Yankees and learn all about American baseball.

Ashley and her father joined my wife Sylvia and me, along with others in the Arlington delegation, to celebrate Bad Konigshofen’s 1275th anniversary two years ago.

While I was the first Arlington mayor to make the journey to our sister city, those who followed me into that office have visited Bad Konigshofen, and current Mayor Jeff Williams and his wife Karen will make a trip there this month.

There are lots of cities in our country with sister cities around the world. There are, however, very few that have been sustained for as long as ours.

With the discovery of all that has grown from a generous mission to help people in need, young people here and there are ready to ensure that the bond continues to be strengthened.