Take a hike! (no, really, you should take a hike!) 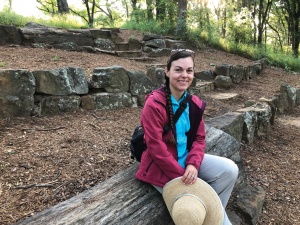 A dragonfly floats in the wind, while a hummingbird whizzes past. A rabbit bounds into the brush, stopping to look back and wiggle his tail. Sounds like a Disney movie, but it’s just a walk through Mansfield’s Oliver Nature Park.
Since opening in 2014, the 80-acre park has drawn visitors like bees to nectar. People come to fish in the two stocked ponds, walk the mile and a half of decomposed granite trails, stroll through the wildflowers on the board walk, get a bird’s eye view of Walnut Creek from the tree house and marvel at the giant pathway of stones in the rocky ford.
But most visitors miss a lot of the nature in this natural park. Mansfield’s Nature Education Supervisor Tiffany Chrzanowski recently took us for a walk through the park to show us where to look and how to listen.
“When you’re observant and looking in the forest, you can find things,” Chrzanowski says. “Come when there are fewer guests earlier in the morning on the weekdays. On the weekends, go to the back of the park.”
Oliver Nature Park is unique because the city has left it in as natural state as possible, she says.
“It’s one of the top (nature parks), in my opinion,” Chrzanowski says. “You have the cross timbers forest, aquatic habitats and blackland prairie, three ecosystems all coming together, so you get all these species.”
Herons and egrets come to fish in the ponds, where turtles pop their heads above the water and bullfrogs croak. Squirrels bound through the trees where a barn owl hoots as evening draws near.
Mallards, green-winged teal and whistling ducks have been spotted on the ponds.
Chrzanowski stops to listen.
“Hear that pew-pew, like a laser? That’s a cardinal,” she says. The tap-tap-tap signals a woodpecker nearby.
She leans down to point out a snail on a fallen rock and a spittle bug (which looks like a wad of spit) on a blade of grass.
Just like a Disney movie, there are villains lurking in the grass.
“There is a LOT of poison ivy, which is why we say to stay on the path,” Chrzanowski says.
She points at a cluster of pretty white flowers.
“That’s bull nettle,” she notes. “The spines, if you touch them will make you hurt and burn. Imagine if you don’t see the pretty white flowers, they’re just hidden in the grass.”
If you turn over a rock, you might find a lizard, snail or snake, she says. The list of reptiles that roam Oliver Nature Park runs the gamut. Texas spiny lizards, green anoles, skinks, rough green snakes, Texas rat snakes, yellow belly water snakes and copperheads call the park home.
“We found a snake in a tree and stopped to watch it,” she says. “All of these people were walking by, but not a single walker saw him. These animals are good for the environment. A lot of people don’t like snakes, but they keep the rodent population in control.”
Chris Del Re of Arlington and his dog Fozzie come to Oliver Nature Park a couple of times a week, looking for peace and serenity. He says he has seen a lot of wildlife on their walks. “I haven’t seen any coyotes, but other people have,” he says.
For youngsters and people interested in learning about the outdoors, nature classes, programs and field trips keep the park buzzing. Go to olivernaturepark.com to find the schedule.
Chrzanowski, who has always loved being outside, enjoys sharing the park with children.
“I like teaching them, seeing rabbits, using their senses to find things,” she says. “It’s a treasure hunt. This is a place they can go and appreciate nature, but also enjoy themselves.”
Oliver Nature Park is at 1650 Matlock Road, open 5 a.m. – 9 p.m. daily through October, and open 5 a.m. – 6 p.m. from November through February. It is free to the public.