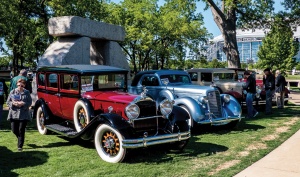 After a successful debut last year, the Concours d’Elegance of Texas returns to Arlington’s entertainment district with new events and amazing classic cars to dazzle visitors with the remarkable worldwide history of the automobile.

It all unfolds during the three-day extravaganza from Friday through Sunday, April 20-22, with lots of opportunities for vehicle owners and spectators alike to experience in the midst of one of the country’s premier displays of vintage and collectable vehicles. 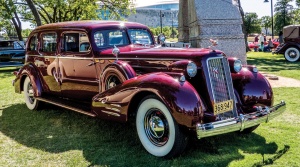 The significance of the experience is defined by the vision of the Concours founders, who planned it to educate and expose audiences young and old to the history, art, and engineering designs of the great automobiles from previous generations.

Such an occasion creates ongoing interest in these beautiful motorcars so they can be appreciated by today’s and future generations.

One terrific example of the kind of vehicles that will be on display is this 1931 Model 840 Deluxe Eight Roadster owned by the chairman of the board of the Texas Concours, Arlington’s own Mike Ames.

I’ll let Mike describe this award winner that is unique in so many ways, but typical of the collectibles, and their stories, on the Sunday show field that will have come to Arlington from all over the country. 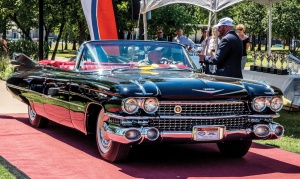 “In 1898, James Ward Packard paid $1,000, about $30,000 in today’s dollars, for a new Winton Automobile, considered the best of only a few makes available at the time. Today it would be considered a lemon, and Mr. Packard made several trips to the Winton factory in Cleveland with complaints and suggestions on how the car should be improved.

“Alexander Winton finally had seen and heard enough from his disgruntled customer and finally blurted out in anger, ‘If you are so damned smart, why don’t you build your own car!’

“Within a year, the name Packard appeared on a thoroughly modern car, and it became available to the public in 1900. This was the beginning of the marque that is now generally regarded as the finest American car produced prior to World War II. 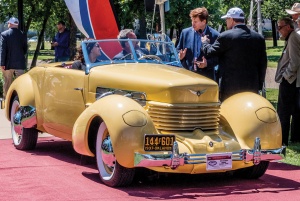 “That quality reached its zenith in the 1930s with a wide array of body configurations and options,” Ames says. “Ironically, the most expensive cars to ever grace American roads were built during the Great Depression.

“The depression created an almost ‘war-like’ acceleration in automotive development because there was a surplus of low-cost manpower and materials. Only those manufacturers who could afford to offer cutting-edge technological advances would survive. Demand was very low but the high-end cars that the well-heeled consumer acquired bordered on being artwork.

“My Packard is one from the final year for the pure roadster, a two-passenger cabin plus a rumble seat. There are no roll-up windows, and the windshield can be folded flat on the hood for true open-air motoring. While 154 were built, there are approximately only a dozen that remain today. 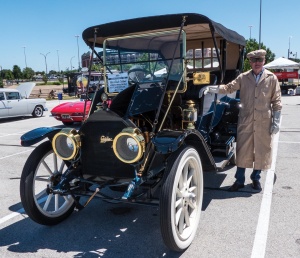 “It is powered by a huge, 385-cubic-inch, 120 H.P., straight eight engine coupled to a 4-speed manual transmission with a floor mounted shifter. The wheelbase is 140.5 inches, and it weighs 4400 pounds. The 19-inch wire wheels were a $60 option, as was the special grill and double tail lights that became standard in 1932.

“Other options included the side-mounted spares, luggage rack, radiator stone guard and the radiator cap sculpture. The total price in 1931 was $3,700 or about $63,000 today. That is for a car that does not have anything we consider basic today … windows, heater (much less air conditioning), radio, no power options, no cruise control, no navigation, no back up camera, none of that.

“The ownership of this car dates to factory delivery, along with a matching Coupe, reportedly to the Mellon family of Mellon Bank, Gulf Oil, Alcoa Aluminum and Westinghouse fame. It has received excellent care since new and benefited from a complete restoration in 1979.

“The history includes extensive touring throughout France, Germany and Switzerland, and extended exhibition at the Imperial Palace Auto Museum in Las Vegas. It has full Swiss registration as a Veteran Car and was awarded a First-Place Trophy at the Raid Basel-Paris Concours d’Elegance in 2003. 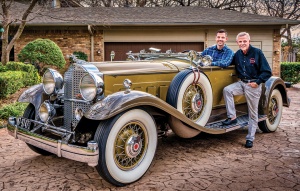 “It earned 98 on the 100-point Classic Car Club of America judging scale in October of 2017. The odometer, believed to be accurate, shows less than 20,000 original miles. This car is a rare combination of exceptional build quality, beauty and usability. It is great to see classic cars that are absolute, surgical perfection and jewel-like. This car is not so perfect that you are afraid to drive it. I use it just enough to allow it to be enjoyed, and that makes it perfect in my book.”

Cars like Mike’s and their histories are all part of the experience on display among the Caleum Moor Sculptures in the Richard Greene Linear Park on the concluding day three of the big weekend.

It all begins with Tour and Track Day on Friday, April 20, when participants will have breakfast with Bugs Bunny and his Looney Tune buddies at Six Flags Over Texas.

Then a police-escorted, 41-mile trip to Cresson, Texas, and the Motorsport Ranch for owners to drive their cars on the professional race tracks there. There’s also the option to drive the exotic cars provided by the Ranch. 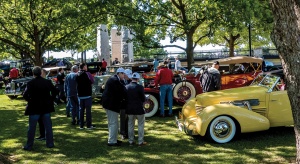 Saturday is the day of the 17th Annual Texas Classic Auction presented by Worldwide Auctioneers at the Arlington Convention Center. Doors open at 9 a.m., with the auction beginning at 11 a.m., when vehicles ranging from five to seven figures in value will be sold to the highest bidders.

That evening there are two options to enjoy a Rangers game inside Globe Life Park. First is a VIP Charity Auction and Dinner at the Hyundai Club, including an exceptional meal, unlimited beer and wine, and the opportunity to bid on silent and live auction items.

A limited number of tickets are available for this event, or you may opt for the Family Fun Night in Home-Run porch that includes an all-you-can-eat buffet.

Then comes the Concours event itself in the linear park between Globe Life Park and AT&T Stadium that opens at 9 a.m. and concludes with the awards ceremonies at about 4:30 p.m.

Proceeds from the weekend of activities will be distributed to three non-profit organizations, including Arlington’s River Legacy Foundation, the Next Gen Education Program, and the Edward Pierce Center for Autism.

All the exciting details, times for each day’s events, and ticket availability can be found on the organization’s extensive website: concoursoftexas.org.