by ArlingtonToday Magazine
in Business and Education, Community, People
0 0
0 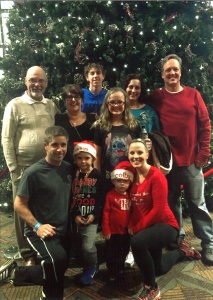 Thirty years ago, the Himert family of Grand Prairie took their six-year-old daughter to see a performance of “The Nutcracker” at Fair Park. Like many young girls who dream of sugar plums and princes, she wanted a nutcracker. “From that one simple nutcracker, her desires were to collect the entire nutcracker suite, so I started buying them for her as gifts throughout the years,” said Tom Himert, father. That daughter is now grown and married, living in Houston with her own family.

Since that first nutcracker purchase, Tom has bought hundreds more in all shapes and sizes. “Over the years, I have purchased many and have given them away as gifts. I also like to collect them, and there are no two that are the same.”

Fast forward to the present day, and Tom still buys nutcrackers. Some he adds to the collection, but many are for his children and five grandchildren who range from teenagers to toddlers. “I search all over for them, especially looking for unusual ones. One granddaughter dances and has performed in ‘The Nutcracker,’ so anything I see with dancers, I buy for her.”

In addition to his daughter in Houston, Tom has a son and daughter-in-law who live in Keller. They have also begun to add to their own collection, in addition to those that Tom has given them over the years.

The Himert Collection has grown to more than 800 figurines of all kinds. These include historical figures such as Shakespeare, Napoleon, Henry VIII and George Washington. Also, many are military, fire fighter, police officers, sports and religious figurines. He even managed to find many of the Star Wars nutcrackers. Many come from Europe, including the famous Steinbach ones. He searches the department and Christmas stores looking to expand his collection.

“Wherever I see one that’s unique, I buy it. It doesn’t matter where it comes from,” said Tom. “My favorites are the hand-painted ones given to me by my children and grandchildren. Those are sentimental because I know the stories behind each one.”

Tom’s wife, Sherry, has also added to the collection. “Over the years, I’ve been able to buy him some unique ones, including the Steinbach Yoda, the Three Wise Men and other unique ones.”

The Himert Collection grew too big to display in their home in Grand Prairie, so Tom would bring down different ones each year to display. Sherry added, “It took Tom a few weeks just to set up the display, but we know both of our parents, family and friends really enjoyed seeing the nutcrackers.”

This holiday season, the Himert family will finally see their entire collection displayed for the first time in years. And the community is invited to experience it as well.

The Himert Family Collection, along with the Rosemary Thornton Brinegar Collection of nutcrackers, are now on display in the historic DeGolyer House as part of The Nutcracker Suite Exhibit, an exhibition of more than 800 displayed in various rooms decorated to resemble scenes from the ballet.

While visiting, guests are invited to stroll through the spectacular outdoor exhibit, The 12 Days of Christmas, featuring a dozen 25-foot-tall, Victorian style gazebos representing the beloved Christmas carol, displayed throughout the 66-acre garden. The 12 Days of Christmas at Night exhibit is open every weekend, enhanced with 500,000 holiday lights, illuminating the trees and intricate gazebos. Holiday at the Arboretum, along with The 12 Days of Christmas, is sponsored by Reliant. To purchase tickets or to make dinner reservations, call 214-515-6615 or visit www.dallasarboretum.org.