Yale’s Tales: This is Groundbreaking

The National Medal of Honor Museum held its Groundbreaking Ceremony

by Yale Youngblood
in Arlington News
0 0
0

Following each successive scoff, Robin Graves found it ever more difficult not to question what her parents were thinking the day they filled out the “name” portion of her birth certificate.

The most recent “big news” coming from our fair burg focused on the much-anticipated groundbreaking ceremony for the National Medal of Honor Museum that took place last Friday – ever-so-appropriately on National Medal of Honor Day. The event was attended by dignitaries the country over, most notably former President George W. Bush. Here are other highlights from the City’s Office of Communication report on the ceremony: 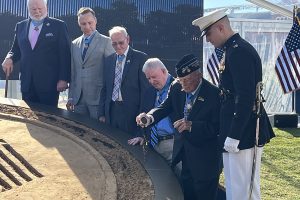 The one-of-a-kind museum will recognize the 3,511 service members who have received the Medal of Honor, our nation’s highest award for valor in combat as well as all who they served alongside. The groundbreaking was attended in person by 15 Medal of Honor recipients who earned their Medals during World War II, Korea, Vietnam, Iraq, and Afghanistan – including the nation’s last living World War II recipient, 98-year-old Woody Williams. CNN anchor and chief Washington correspondent Jake Tapper served as emcee of the historic event. 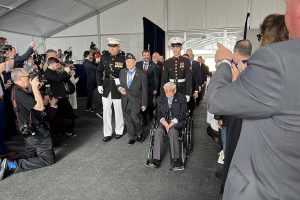 The ceremony also featured a military flyover by the 301st Fighter Wing from Joint Base Fort Worth; video tributes voiced by Academy Award-winning actor Matthew McConaughey; performances by the U.S. Marine Corps Silent Drill Platoon, the U.S. Air Force Band of the West, and the U.S. Naval Academy Glee Club; and remarks from Chairman of the Joint Chiefs of Staff General Mark A. Milley and Medal of Honor recipient Major General Patrick H. Brady.

“The values of the Medal – courage, sacrifice, patriotism, citizenship, integrity, and commitment – unite us all as Americans. I, like so many other recipients, wear this Medal on behalf of all those we fought alongside in defense of our nation. Today’s groundbreaking is a significant moment. The National Medal of Honor Museum will exist to bring the nation together to reflect upon these enduring ideals,” said Medal of Honor recipient Lieutenant Colonel Will Swenson. 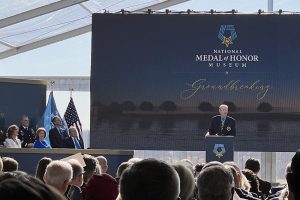 “The National Medal of Honor Museum Foundation is grateful for the outpouring of support our mission has received and we’re thrilled to begin construction of this historic museum. With only 66 Medal of Honor recipients alive today, time is of the essence to recognize their incredible contributions to our nation in their lifetimes,” said Chris Cassidy, NMOHMF President & CEO. “With the Museum set to open its doors in 2024, these heroes and their inspiring stories will finally be recognized in a national and permanent way.”