A gamer (and Hall of Famer) 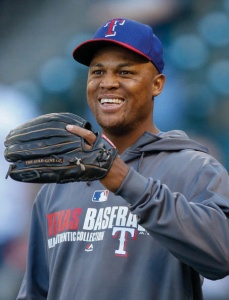 In December 2010 the Rangers had a Christmas celebration and filled an auditorium at UTA with fans. It’s the most wonderful time of the year, after all, and the Rangers were just two months removed from the first trip to the World Series in franchise history.

Still, there was disappointment in the air that night. Earlier that day Cliff Lee had announced his intention to pitch for the Philadelphia Phillies rather than sign a long-term contract with the Rangers. It felt like a loss; it felt like a slap in the face. Fans and even some media spent time wallowing in defeat. General Manager Jon Daniels did not – he acted swiftly and decisively and used that money to sign another free agent.

Perhaps you have heard of him; his name is Adrian Beltre.

That might be the greatest swing and miss – and home run – in Rangers history. A swing and a miss on the Lee contract turned into a grand slam in Beltre.

You might recall that there was some controversy as he arrived. After all, Mr. Ranger, Michael Young, was the third baseman in 2010. He would be asked to move … again. Amid that brewing controversy, Adrian joined the team, with his mad defensive skills, his remarkable offensive consistency and a love of the game that could be seen every time he smiled, which he did a lot.

In fact, he still does.

In 34 years of covering baseball I don’t believe I have ever seen someone enjoy the game more than Adrian. He loves being in the clubhouse with his teammates, he loves hanging out around the cage during batting practice, but most of all he loves the games.

From his fleet-footed happy dance in the batter’s box after a pitch came a little too close, to messing with Elvis when either of them could catch a pop up on the left side of the infield to getting tossed out of a game for moving the on deck circle, Adrian Beltre makes everyone around him smile.

Amazingly, I have never seen anyone have a more serious approach to the game, either. He strikes the perfect balance, playing a kids’ game with the wide-eyed joy of a pre-teen and the stern demeanor of a coach.

Adrian has been playing professional baseball for 20 years. So he knows the appropriate action or reaction to everything that happens. If a player is getting too cocky or disrespecting the game, it is AB who lets him know. If Elvis crosses the line and has too much fun or is not serious enough about his craft, AB will pull him aside. Last year when the team had a night off in Oakland Adrian arranged a spot for the team to watch the Mayweather/McGregor fight.

He is like that perfect parent who has tons of fun with the kids but can affect their behavior with just one look.

Adrian has one year left on his contract, so this could be the last year we have to enjoy what has become a Hall of Fame career.

We got to celebrate 3,000 hits with him last year. There will be more milestones this year, although none as significant as that. He would like to play a couple of more years beyond 2018.

Whether those years are with the Rangers will depend on how the team performs this year. The truth is: For all he has accomplished, Adrian does not have a ring. He wants one badly. So after this year he could sign with a team that gives him a chance to win one.

We can only hope the Rangers are that team. We can hope they are good enough this year to bring him back. He will turn 39 in April, but he will continue to act more like a 9-year-old on the field. A 9-year-old who loves to win, loves his team and loves the game.