by Karen Gavis
in Business and Education, Community
0 0
0

Sunbeams stream through upper level window panes to present a rainbow of colors whose position adjusts depending on the time of day. It’s just one of the features of the new additions at First Baptist Church Arlington.

On Sundays, about 400 people use the new brick and wood Children’s Building facility, FBCA spokesman David McDurham says, adding that the idea was to create a space where children from birth through six years of age could be in one place with youth facilities.

“There’s a big fish tank built into the wall that the kids seem to like a lot,” he says. And “there’s a play room now. The official name is Children’s Building, So, it’s not anything fancy. It’s just the children’s building.”

The 50,000 square-foot, partially rotund structure, which was designed by the Beck architectural firm, took about 16 months to build and was completed in July. McDurham said about $13 million was dedicated to the construction project, part of which was spent completing a major overhaul on the church’s sanctuary which was built in the 1950s.

“We had nearly that much raised, McDurham says, but this was part of a bigger three-phase campaign called ‘Blessing the Generations.’”

Along with Sunday school classes, activities are held on Wednesday night in the new building, and a Child Development Center serves as a daycare Monday through Friday for the community. McDurham says about 125 children receive day care services at the facility. There’s also a new grassy courtyard, says McDurham, describing a recent scene where a mom had a yoga session on the courtyard lawn while her children played nearby.

Church members appreciate that everything is new and well organized with spacious meeting rooms and storage areas, as well as lobbies, McDurham says. “We’re just excited to have a place where we can organize a meeting room,” he says while branding the new facility as “everything you’d want.”

After touring the Children’s Building that houses newborns through kindergarteners on the ground floor and grades first through sixth on the upper level, Schahn walks down the hallway and pauses to reminisce before an image of the church’s current and former leaders. 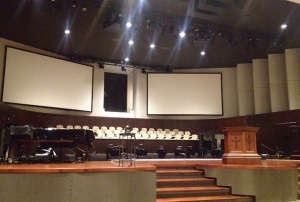 “I was here through all those preachers,” he says of the trio of men in the painting.

Schahn and his late wife Doris Ann attended seminary school together, he says, and dedicated their lives to working with young people.

Looking at the new apartment buildings being constructed around First Baptist Church in Downtown Arlington, Schahn says he hopes some of the residents will visit FBCA and make use of the new facilities.

“It’s always a good surprise when pledges come through and people are supportive in that way,” he says. “It’s been a big blessing for sure.”